Tornadoes of blackbirds twist down

Kansas dirt, in my memory,

about the size of a card table.

he would have never played cards,

but he must've planted

strawberries, because I was delighted to

The night my mother

she made me dig up dirt

with an old lunch spoon

In the night’s stealth

I unburied some soil

into a juice bottle.

Grandpa wanted to be buried

in Pennsylvania soil, she said.

So we would bury some with him.

Now he walks among strawberries

I wrote this in circa 2002 when I first set out to write a book of poetry. It was finally published in this final form in  "Tea with Alice" in 2019 a book of poems dedicated to my grandparents, but first in Nantucket River Review in 2015. I worked on this set of seven poems for 20 years and finally turned it into a whole book. For a while, I considered calling it the Purple Clay chapbook because of the funny color of the soil, quite beautiful, in that area of PA. I also called it "For A Place." But finally settled on "Tea with Alice." I rephrased the ending to have the word strawberries because of the Wyandotte Tribe tradition of using this expression for heaven. I always associated my grandfather with strawberries. And my grandparents worked and lived in Wyandotte county Kansas for decades.

Poetry changes in the twentytwenty

My poems used to be like lightning or at least predictable as static from running in tap shoes on a soft carpet. This year I didn't make... 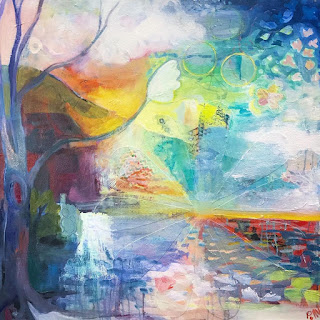 "Dazzle Gradually" 2020 Once upon a poem a day this blog began as a diary, a discipline, a delight. You read over my shoulder as I post my unedited poetry in the raw. First came a chapbook then two more full collections. Now I'm a poetry editor and soon to be performer. Trace the journey here as I develop new work and link to publications, videos, and new things to come.

pollyalice_artist
Kansas City, MO, United States
POLLY ALICE MCCANN's art and poetry has been published in US newspapers and magazines most recently in Rattle magazine. She is an adjunct writing professor and creative consultant; she is also the founder and managing editor of Flying Ketchup Press. She credits much of her creative work from her study of the subconscious creative process that gained her the 2014 Ernest Hartmann award from the International Association for the Study of Dreams from Berkeley, CA for research. A graduate of Messiah College with a degree in Studio Art, and her MA in Writing at Hamline University in St. Paul, her art has been published in several international journals and elsewhere. She says her favorite thing is to tell stories-- other people's, her own-- maybe yours. Find her at www.pollymccann.com